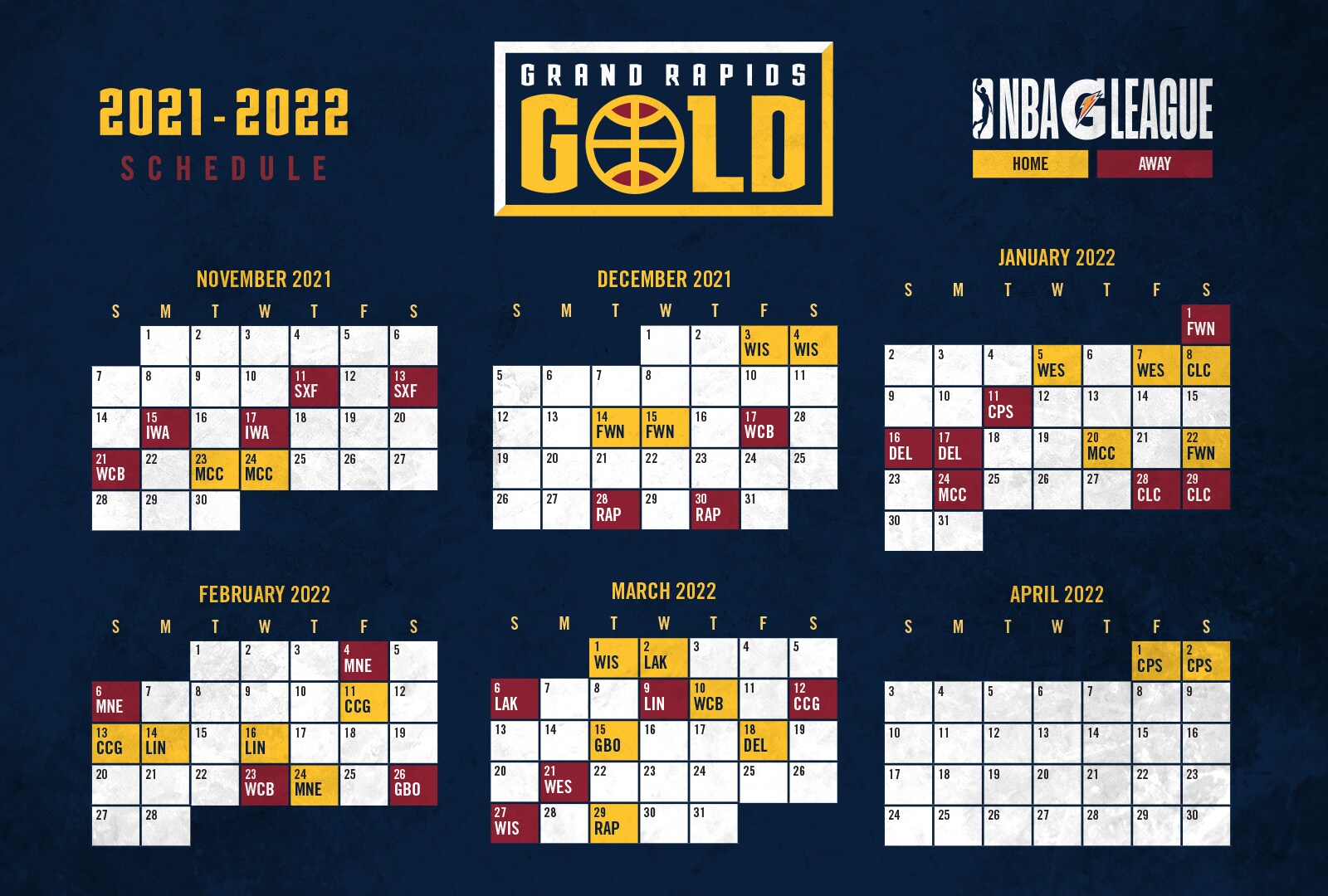 GRAND RAPIDS, MI (September 14, 2021) – The NBA G League and Grand Rapids Gold, the NBA G League affiliate of the Denver Nuggets, have released their 2021-22 schedule, announcing an innovative structure for the upcoming season that includes a 14-game Showcase Cup and a traditional 36-game regular season. The Grand Rapids Gold will start their season on November 11 in Sioux Falls, Iowa, and return to their home court for the first time since March 2020 on November 23, hosting new, in-state rival, the Motor City Cruise.

“Our team is excited to engage with fans for the first time in 20+ months,” noted Steve Jbara, president of the Grand Rapids Gold. “It’s been a long haul, but our partnership with the Denver Nuggets has elevated our operation at every level and will ensure the best fan experience come fall. We’re excited to see this schedule and to announce theme nights and special promotions in the coming weeks.”

The Grand Rapids Gold will kick off their 2021-22 season with a “Back to Basketball” Youth Clinic on Thursday, September 16. The event, held at the Salvation Army Kroc Center in Grand Rapids and in conjunction with the NBA G League’s Fan Fest presented by Wilson, will allow 75 kids ages 8-14 to participate in a free basketball clinic alongside staff from the Grand Rapids Gold, including new coach and NBA Champion Jason Terry. Participants may register online to secure their spot.

For media-related inquires and interview requests, contact Gwen Vryhof Bultema at gbultema@nbagrandrapids.com or 616-536-1400. For more information on the Grand Rapids Gold, visit www.nbagrandrapids.com.

About the NBA G League
The NBA’s official minor league, the NBA G League prepares players, coaches, officials, trainers and front-office staff for the NBA while acting as the league’s research and development laboratory. Featuring a total of 29 teams with 28 teams having direct affiliations with NBA franchises ahead of the 2020-21 season, the league offers elite professional basketball at an affordable price in a fun, family friendly atmosphere. A record 45% of all NBA players at the start of the 2020-21 season boasted NBA G League experience. In fostering the league’s connection to the community, its teams, players and staff promote health and wellness, support local needs and interests, and assist in educational development through NBA Cares programs.

About the Grand Rapids Gold
The Grand Rapids Gold are a member of the NBA G League and affiliated with the Denver Nuggets. The organization is committed to providing an elite level of basketball to the West Michigan community, while also investing in and contributing to the West Michigan community. The team is owned by SSJ Group LLC. For more information about the organization, visit www.nbagrandrapids.com and follow the team on its social media channels.